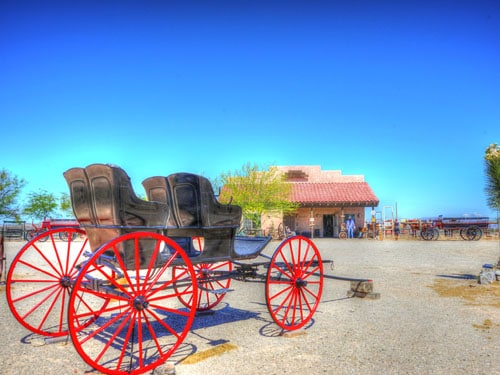 Throughout our ranch, we have an abundance of old, antique wagons that our guests are welcome to walk around and look at, 24 to be exact. Most of them date back to the late 1800s and early 1900s with a few more modern ones that we actually use. This collection was the result of a long period of searching and amassing these fascinating relics of the West and going to auctions to acquire them. Wagons were the equivalent of the modern automobile or RV today, as they could carry a lot more supplies than what could be carried on a horse. Horses, mules, donkeys, and even cows could pull more weight than could be physically put on their back, which made wagons much more efficient for carrying large loads over long distances. It was common to have two animals side-by-side pulling the wagons, but it was not uncommon to have just a single animal, but sometimes they had 4, 6, and even 8 horses for pulling heavier loads. 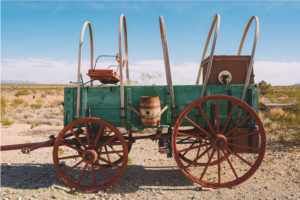 Now these were not exactly quick excursions though, as the rough terrain and slow-going nature of the process made for a long journey, but as they say, “slow and steady wins the race”. Wagons were used for everything: hauling water, transporting valuable Wells Fargo gold, taking passengers to and from towns, to packing up all your worldly possessions and moving out West. You can almost imagine how the different styles helped influence our current vehicles we use today. 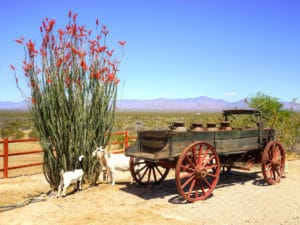 We have some wagons that were simply just a two-seater, often used by fancier folk like the mayor or town doctor to get around in, equivalent to the modern coupe or sports car today. Then we have the buckboard wagons that were also two-seaters but had a long flat bed at the back to carry supplies to and from town, the equivalent of the modern pickup truck today. We have wagons that had two rows of seats, which allowed more passengers to be carried such as a whole family, equivalent to the family sedan or minivan today. 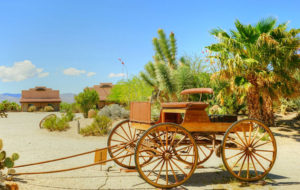 Of course we have our stagecoach, which carried passengers inside an enclosed cabin with room for the luggage on the roof. These were how people traveled in luxury and comfort and would be the equivalent of the modern SUV today. 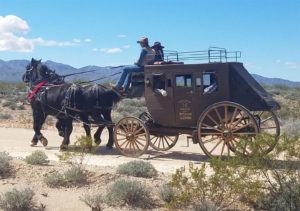 Then we have the grand covered wagons, which were used as a means of moving across the country, carrying a large load of supplies and acting as a sleeping area under the cover during the night. These large and rugged wagons were the equivalent of the big campers and RV’s of today, where the whole family could spend weeks or months on end traveling. 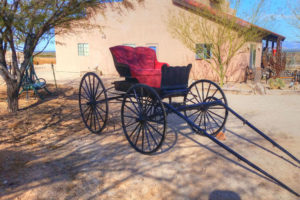 We even have a few wagons which had very clear uses, like our fire truck wagon, which is a huge tank on the frame that would have been filled with water and brought out to the scene of a fire, where the fireman would have to manually pump the water through the hose to build up pressure. 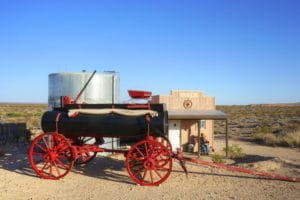 Then we have our Tombstone Funeral Parlor hearse, which was actually used to bring various outlaws or valiant gunfighters to their graves at the infamous Boot Hill cemetery. It is really fun to walk around and try to imagine how the pioneers and homesteaders used these. And when you think of comfort, a lot of these wagons actually have leaf springs under the seats and even under the whole frame! These were fairly ahead of their time, as that made for a much better ride. 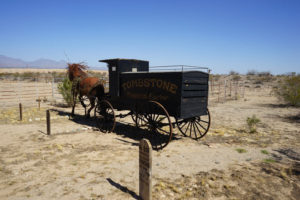 Still, the wooden wheels and later steel wheels were not exactly smooth by modern standards, that combined with the rough roads made wagons a bit of a bumpy ride. But they got the job done, and are a great inclusion the creating a true Western experience here at the ranch, serving as a great activity to check them out during the day. 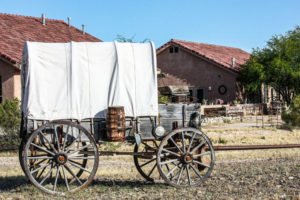 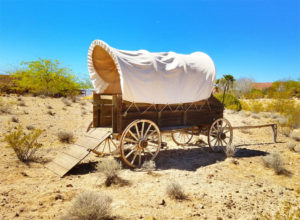 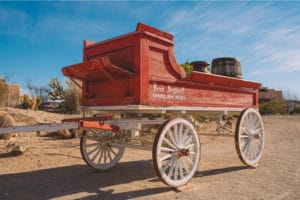 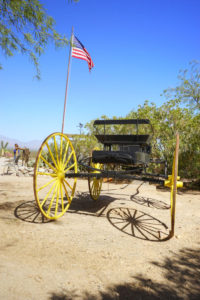