Located 40 miles southeast of the ranch lies the vast and secluded Alamo Lake. This Arizona State Park is a very unique feature for it’s remoteness and fascinating history behind it’s construction, as it is actually a manmade lake. Lakes are made often by damming a river and letting the water build up behind it to flood a valley. This is done as a means of flood control and to build new recreation spot for campers, boaters, off-roading and fishing. These lakes give birth to a rise in tourism and an opportunity for all to explore. 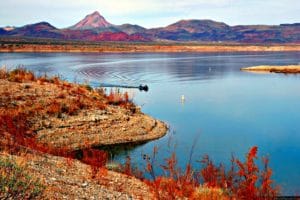 Alamo Lake started in 1968 when a dam was contracted along the Bill Williams River by the Army Corps of Engineers. The dam is 283 ft tall and is a earthfill style of construction, unlike the Hover and Parker dams that are solid concrete. Earthfill dams are made up of layers of rock and sand, using the strongest materials in the middle and the softer materials on the upstream and downstream sides. While the lake was built originally for flood control, the lake levels rose significantly in the decade that followed it’s construction and that made way for recreational opportunities due to the increased depth and surface area of the water. One fascinating story about the lake is that there is actually an ghost down at the bottom of the lake! Before it’s construction, along the Bill Williams river laid the town of Alamo Crossing. The town was established in the 1890s and boasted a post office, a mill, and a few stores, not particularly large for those times. It was abandoned in 1918 and sat in ruin for 50 years. It was supposedly one of the better preserved ghost towns in the area and everything was left there during the creation of the lake. So to this day one could scuba dive down to the bottom of the lake, which has a max depth of 80ft, and explore a flooded town on the bottom. Talk about a unique and eerie experience, as you look into the past of the west from an entirely different perspective. 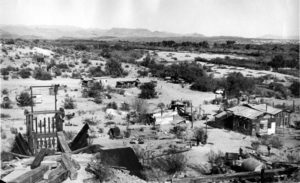 Alamo Crossing before it was flooded

Today, the Lake has two very different sides and entrances, the north and south side. The south side is a more popular area where there are campgrounds, cabins to stay in, an RV park and a park visitor center nearby.   A few miles south of the lake is the Wayside Inn, a bar and grill for weary travelers who need a much needed meal, as the road to the Lake is a long ride through the desert. There is also a boat ramp in order to access the water. This is by far the more popular side to visit as it has amenities and easy paved access. Now, the north side is a completely different experience, and for us here at the ranch, it is actually our favorite area. This is what makes our ranch unique, because we are much closer to the northern side than the south, and we really offer the best access to it for people to stay overnight. The lake is about a hour drive from our ranch to the waterline, but there’s a few very good reasons for that. Mainly because the drive there is very scenic and very remote as you drive through mountain ranges and really get a great experience of the wilderness that is out there. There are no houses or paved roads or really many modern features the whole way there, which really gives you an amazing feeling. The road is dirt the whole way which also makes for the adevnture. One you reach the lake the road just continues into the water and that’s the end. But this is the quiet side, since it has none of the features that the south side has, yet camping is still permitted and available. With options like these we often say ‘to each their own’, some prefer modern conveniences while some prefer rugged adventure, which is what makes Alamo Lake great for anyone.