Located 30 miles north of the ranch along historic US Route 66 lies the remote mining town of Oatman, AZ, nestled high up in the Black Mountains.  The town was formed in 1915 when two prospectors struck a $10 million gold lode in the area and the population soon grew from a small camp to a town with a population of 3,500.  This put Oatman among the largest producers of gold in the United States during its peak and even helped fund the war efforts during World War I.  As time went on, the gold resources started to dwindle by the 1940s, and Oatman became more of a stopping place between Kingman, AZ and Needles, CA as it is fortunately right on route 66.  But with a new bypass highway created in the 1960s, Oatman became a ghost town.  But fortunately, recent international interest and intrigue in the historic route 66 has helped the town to revive itself and become a popular hub for tourism today as it still retains it’s local western charm.  When someone envisions the charm and antiquity of the iconic small American road town, this places fits the mold perfectly, but with a few special twists.

Getting there is part of the fun too.  Exit 44 off of Interstate 40 brings you to a junction with Highway 10, make a left onto the two lane road to start the journey.  The road leading up to Oatman is long and winding, with many “horseshoe bends” along the way as you climb up over 1000ft in elevation.  There are numerous photo opportunities and even places to pull off the road and stop to do so safely as the views of the valley are spectacular.  After reaching the top you descend down the other side of the mountain, passing many old mining features and ruins along the way.  The road almost brings you back in time as you try to imagine how all the old miners used to get to their remote prospects by donkey and wagon.  Finally after the stunning drive you come over a hill and reach the town of Oatman.

One of the first things people notice about this place is the abundance of burros roaming the street.  Burros are essentially donkeys, and there is a very large herd of them left over from the days when the mines were still in operation.  These tend to be called wild burros, though technically they are feral as their descendents were domesticated.  But they have sustained a population for 100 years and still do so to this day.  The ones you see in town are quite friendly and roam around the streets and sometimes even try to poke their heads into the numerous shops and stores that line the road.  The town has a very strong western flair as people walk around in western clothes and every few hours the townspeople take part in mock gunfights in the street.  These shows attract huge crowds and often end with a good laugh at the creativity and originality of their scripts.  There are a number of historic buildings in town as well including the Oatman Hotel, established in 1902, which back in the day housed many movie stars and famous people including Clarke Gable and Carole Lombard on their honeymoon in 1939.  The hotel is also said to be haunted by the ghost of an old Irish Miner nicknamed “Oatie”, who drank himself to death there one night back in the day.  Numerous guests at the hotel have reported sightings and strange occurrences there, and after seeing the antiquity of the building you tend to imagine yourself why such ghost stories there persist.  Throughout town you will find many antique shops and tourist stores as well as rock shops and local artisans.  Many of the buildings are old and it definitely adds to the rustic feel of this town.  Interestingly enough, the increased gold prices in recent years have spurred some new mining operations in the surrounding areas as modern prospectors have once again set out into the mountains in search of the mother lode.  Since this was one of the most prosperous gold mining areas in the state, there is still a lot of resources out there to discover.

People often visit Oatman when they stay at the ranch, either as a day trip during their stay or after they’ve left. Getting there is very easy from the ranch and takes a little over an hour.  Our guests are never disappointed there as is it truly unlike anything they have seen before.  Everyone can find something about this place that they love, be it the friendly burros, the vast history, the local shops, or just the spectacular drive and views along the way.  Visiting this place truly is a very unique experience for the whole family and gives people a chance to take a glimpse back in time to a town that still retains it’s old western charm in this increasingly modern world. 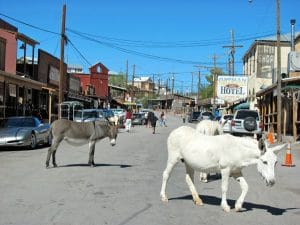 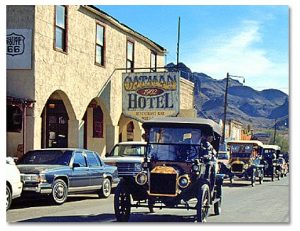 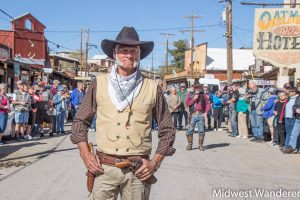 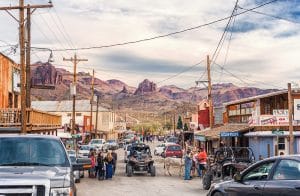